If there is one piece that most of us probably have in our closets, it’s the classic Breton striped shirt. This cotton long-sleeved shirt with horizontal blue and white stripes, originally worn by seamen in the French Navy, has become a staple in French fashion. Nothing says French effortless chic quite like a Breton top. It has an everlasting appeal that we doubt it will ever shake. And some of the most stylish moments in history featured these famous stripes; cast your mind back to Audrey Hepburn in Funny Face or the many photos of Brigitte Bardot at St Tropez.

A Brief History Of The Iconic Breton Striped Shirt

In 1858, the French Navy introduced a heavyweight indigo-striped shirt for its uniform, otherwise known as the Breton, the marinière, or tricot rayé in French. The blue-and-white tee, with 21 total stripes (a tribute to each one of Napoleon’s victories) was an easy way to detect the whereabouts of unlucky French sailors who’d fallen overboard on the high seas. The shirt was also designed with three-quarter length sleeves and a boat neckline — a low cut hem around the neck — so that it could be easily removed and waved around, thus making the lost sailor easy to spot.

La marinière became a fashion statement at the beginning of the 20th century. First, the Breton stripe was really “discovered” by Coco Chanel, who brought the style into the fashion mainstream after incorporating blue and white stripes into her 1917 nautical collection. Her main inspiration was the sailors’ uniforms she saw during a trip to the French Coast. Years later, Karl Lagerfield paid tribute to the Maison Chanel by regularly recreating the marinière for his fashion shows, especially in his ready-to-wear summer collection “Croisière”.

In the 1940s well-known personalities from John Wayne, then Jean Cocteau, Pablo Picasso, Audrey Hepburn, Andy Warhol, Brigitte Bardot to Marilyn Monroe adopted the look. In 1960, the Breton striped shirt was associated with French New Wave Cinema and was a favorite of many on-screen stars like Jean Seberg, who wore the sailor style in the 1960 film “Breathless”.

Since then, the Breton striped shirt has become something of a French cliché and stereotype. The marinière —regardless of thickness and number of stripes plus the color of them— is now considered a staple of the effortlessly chic French style. Many French people (both men and women) still wear this iconic sailor’s shirt, a must-have on the French wardrobe.

The Breton stripe has since been a staple of many women’s wardrobes, and it suits pretty much every occasion and style. It’s now easier than ever to buy a Breton, and you can get your hands on all sorts of color combinations, widths, and sleeve lengths to suit your taste. Here are listed below a few of my favorite marinières to shop for. 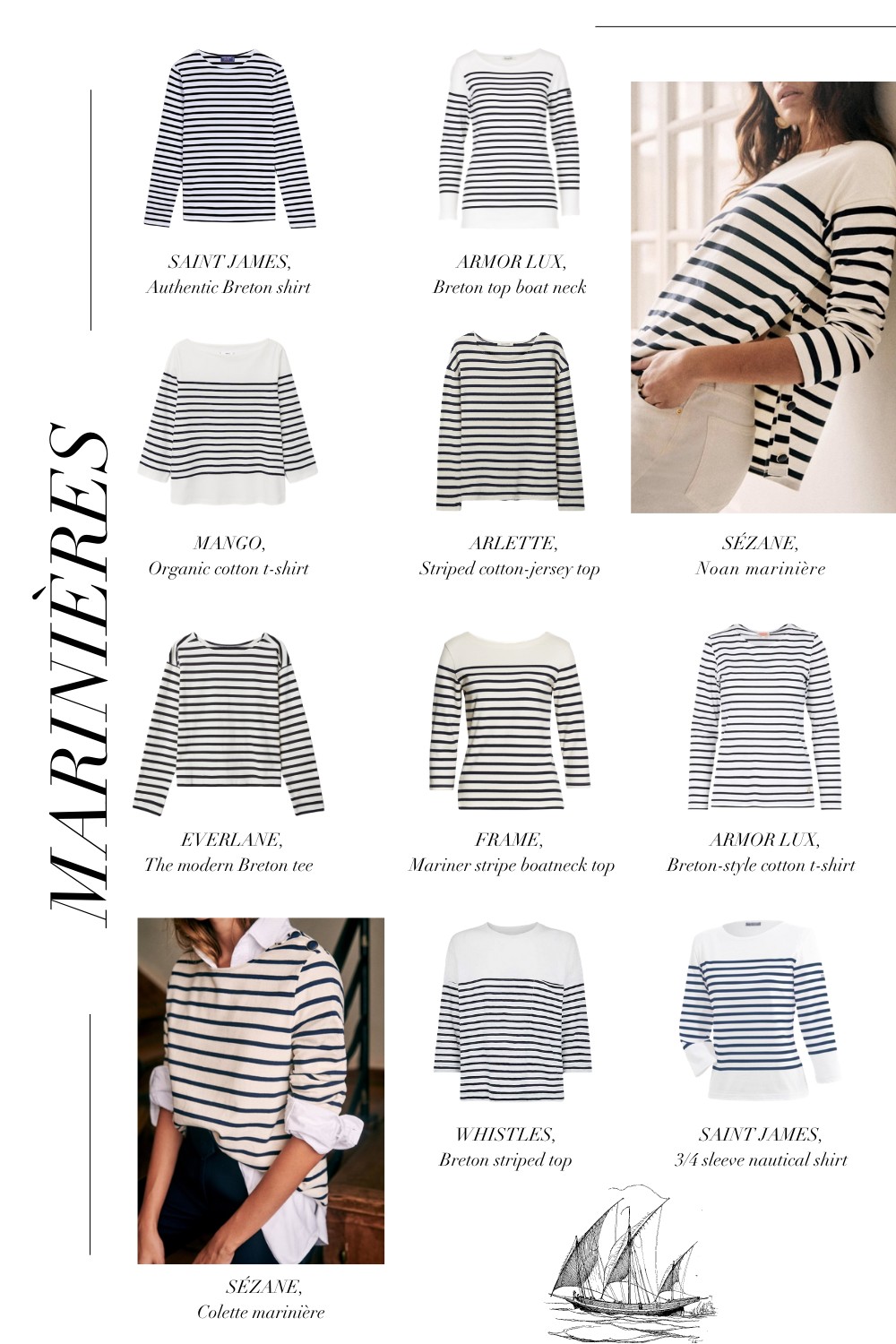 The Authentic Marinière Made In France

Saint James was first worn by sailors as a uniform back in 1858. Founded in 1889, Saint James was one of the first companies to start producing Breton striped shirts after the production moved upwards from a cottage industry. The brand’s designs are still made in the same atelier near Mont Saint Michel in France.

How French Women Make Jeans Look So Elevated And Chic

Created in 1938 in Quimper, Armor Lux has become an iconic French fashion brand, famous for the originality of its clothes inspired by the sea, and its commitment to producing the highest quality knits from its factories in the Celtic region of Britany, France. Taking inspiration from the French maritime tradition, Armor-Lux produces authentic nautical pieces for men, women, and children.

Since 1939, Orcival has been founded to manufacture marinières for the sailors. A genuine brand with a strong commitment to promoting know-how and high-quality products, Orcival perpetuates manufacturing in France of timeless, iconic Breton striped shirts. Orcival’s marinières are made to last. Indeed, the company upcycles vintage Orcival Marine Nationale marinières that feature an ink ID number.

Et voilà! I hope this guide will help you to shop for the best French Breton striped shirt! If you have any questions, let me know in the comment section below.

Disclosure: This article contains affiliate links. When you purchase through links on the site, I may earn an affiliate commission, at no cost to you. I only recommend products I genuinely love. Here’s why you can trust me.

The 15 Staples Every French Woman Has in Her Wardrobe

10 French Fall Wardrobe Staples to Add to Your Closet Now

The 5 Blazer Styles For Achieving a French Polished Look

How French Women Make Jeans Look So Elevated And Chic

10 Essential Shoes Every French Woman Has In Her Closet