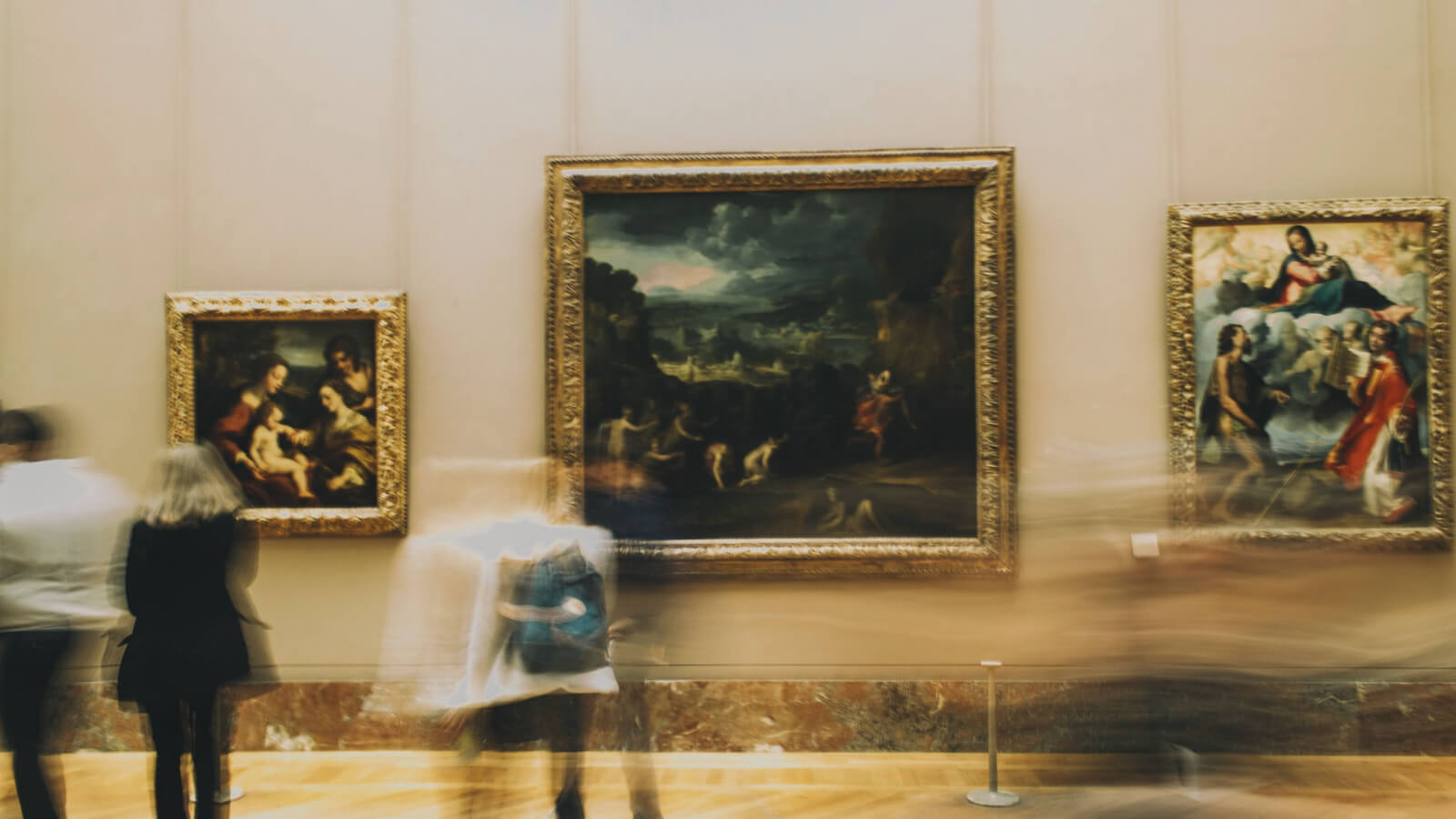 Here are the twenty best museums and galleries in Paris. If you’ve visited Paris once (see my guide to do Paris like a local), you’ve probably done the Musée du Louvre, but the city has plenty more to offer! Visitors could spend an entire vacation (or a lifetime) exploring the art collections in Paris.

Paris is one of the cities with the greatest diversity of museums in the world! Indeed, Paris is home to 130 museums —many of which are world-class institutions— showcasing paintings, sculpture, photography, contemporary art, science, and collections on a whole range of subjects. There is so much to see! Whether it’s contemporary art, fashion, architecture, or temples to Monet and Picasso, there’s a museum for visual art in all its forms here. And it’s easy to feel overwhelmed by the sheer breadth of the art here! To help you choose and not miss out on some of the best, I offer you a quick overview of the twenty best museums in Paris.

The Louvre is the world’s most-visited museum and a historic monument in Paris. Established in 1793, the Louve is a vast, multi-level maze of galleries, passageways, staircases, and escalators, all topped with its iconic pyramid roof. It is the home of more than 35,000 works of art and artifacts and many of the most known works of art, including the Mona Lisa. Walking through the halls where Louis XIV once strolled (he lived here before moving to Versailles), surrounded by the most famous art on earth can be an overwhelming experience.

Discovering the highlights of the Louvre Museum requires several days in itself. Tourists often get lost in the seemingly endless galleries, which are filled with masterpieces of Western Civilization. For first-time visitors, I’ll recommend a guided tour of the Louvre.

The Musée d’Orsay is the second-most-visited museum in Paris (after the Louvre, of course). Housed in a former train station the Gare d’Orsay, the collection includes all of the Impressionist and Post-impressionist movements’ big hitters —Monet, Renoir, van Gogh and Toulouse-Lautrec— as well as some dapper decorative arts from the Art Nouveau era and a wide range of 19th-century sculpture. Be sure to visit the café and watch time go by on the museum’s giant transparent clockface.

When the Centre Pompidou opened in 1977, it was a controversial design for a museum—all industrial pipes and open glass views of Paris. Known to locals as simply “Beaubourg” because of its location, Pompidou’s modern art collection is the largest in Europe, rivaled only in breadth and quality by MoMA in New York. Within the massive 100,000-piece collection that stretches back to 1905, you’ll find everything from Picassos to video installations.

The Galeries Nationales du Grand Palais (Grand Palais National Galleries) are museum spaces located in the Grand Palais. They serve as home to major art exhibits and cultural events organized by the French National Museums Associations. In recent years it has put on huge exhibitions on the likes of Irving Penn, Marc Chagall, and Paul Gauguin. It is actually closed for renovations until 2024, but in its place, there is now the Grand Palais ephémère, a 10,000 sq. foot temporary space on the Champ de Mars, which will host the artistic, cultural, fashion, and art events that would normally be held in the Grand Palais.

On the other side of the road from the Grand Palais, you’ll find the Petit Palais. Built for the 1900 Exposition Universelle (“universal exhibition”), it now houses the City of Paris Museum of Fine Arts (Musée des beaux-arts de la Ville de Paris). Behind its Belle Époque, exterior visitors can cast their eyes on some of the city’s most wonderful fine art and sculptures, including work by Poussin, Doré, Courbet, and the Impressionists. Art Nouveau fans are in for a treat downstairs, where you’ll find jewelry and knick-knacks by Belle Époque biggies Lalique and Galle.

The Musée de l’Orangerie is an art gallery of impressionist and post-impressionist paintings located in the west corner of the Tuileries Gardens next to the Place de la Concorde in Paris. Among the most well-known works is Monet’s “Nymphéas”, the water lily paintings he donated to the state in 1918. Also on display is a strong selection of Post-Impressionist works, including Matisse, Modigliani, and Picasso.

Musée Marmottan Monet features over three hundred Impressionist and Post-Impressionist paintings by Claude Monet, including his 1872 Impression, Soleil Levant. Originally a museum of the Empire period left to the state by collector Paul Marmottan, a donation by Monet’s son Michel in 1966 meant it added 165 of the Impressionist artist’s works, plus sketchbooks, palettes, and photos overnight.

The Musée Jacquemart-André is a private museum located at 158 Boulevard Haussmann in the 8th arrondissement of Paris. Enter into this grand 19th-century mansion, home to an impressive collection of objets d’art and fine paintings which includes Rembrandts, Tiepolo frescoes, and paintings by Italian masters Uccello, Mantegna, and Carpaccio. The museum was created from the private home of Édouard André and his artist wife Nélie Jacquemart to display the art they collected during their lives using money inherited from his rich banking family.

The Musée du Quai Branly – Jacques Chirac is a museum designed by French architect Jean Nouvel to feature the indigenous art and cultures of Africa, Asia, Oceania, and the Americas. The museum collection comprises more than a million objects (ethnographic objects, photographs, documents, etc.), of which 3,500 are on display at any given time, in both permanent and temporary thematic exhibits.

The French National Museum of Natural History is the national natural history museum of France and a grand établissement of higher education part of Sorbonne Universities. It was formally founded in 1793 during the French Revolution but was begun even earlier in 1635 as the royal garden of medicinal plants.

With spaces dedicated to plants, animals, minerals, and human beings alike, the Musée National d’Histoire Naturelle de Paris is a group of museums, gardens, galleries, and even zoos throughout the Île-de-France region dedicated to natural treasures. Located in Paris’ 5th arrondissement, the heart of the Museum is comprised of four main spaces: the Jardin des Plantes, the Ménagerie, the Grande Galérie de l’Évolution and the Grandes Serres.

This Metier Arts Museum is, in fact, Europe’s oldest science museum. Founded in 1794 by constitutional bishop Henri Grégoire, it was initially a means to educate France’s manufacturing industry in useful scientific techniques. It became a museum proper in 1819. The museum has over 80,000 objects and 15,000 drawings in its collection, of which about 2,500 are on display in Paris. Highlights include an original version of the Foucault pendulum, the original model of the Statue of Liberty, some of the first planes, and Blaise Pascal’s first mechanical calculator.

The Musée Rodin is a museum that was opened in 1919, primarily dedicated to the works of the French sculptor Auguste Rodin. The museum occupies the Hôtel Biron an hôtel particulier where the sculptor lived in the final years of his life. The high ceilings of the intimate rooms allow visitors to see Rodin’s sculptures and drawings up close, while the large gardens showcase his most famous bronze sculptures, like “The Gates of Hell” and “The Thinker.” Rodin’s works are accompanied by several pieces by his mistress and pupil, Camille Claudel. It’s one of my favorite museums in Paris!

The Musée de la Vie Romantique stands at the foot of Montmartre hill in the 9th arrondissement of Paris, 16 rue Chaptal, in an 1830 hôtel particulier facing two twin-studios, a greenhouse, a small garden, and a paved courtyard. This villa was built by the Dutch artist Ary Scheffer in 1830. The museum is devoted to Sand, plus Scheffer’s paintings and other mementos of the Romantic era including plaster casts by Clésinger of the writer’s sensuous right arm and Chopin’s delicate left hand. Renovated in 2013, the museum’s tree-lined courtyard café and greenhouse make for the ideal summer retreat.

The Musée Picasso is an art gallery set in the great 17th century Hôtel Salé in the heart of the historic Marais area. The museum is dedicated to the work of the Spanish artist Pablo Picasso. The collection includes more than 5,000 works of art (paintings, sculptures, drawings, ceramics, prints, engravings, and notebooks) and 10,000 archived pieces from Picasso’s personal repository, including the artist’s photographic archive, personal papers, correspondence, and author manuscripts.

The 6 Best Paris Department Stores for Shopping and More

The Musée des Arts Décoratifs is a museum founded in 1905 by members of the Union des Arts Décoratifs and dedicated to the exhibition and preservation of decorative arts. The museum occupies the most north-western wing of the Palais du Louvre, known as the Pavillon de Marsan. It’s also the city’s second-oldest museum, after the Louvre, making the historic building itself is part of the draw—particularly that stunning, vaulted central atrium.

It houses and displays furniture, interior design, altarpieces, religious paintings, objets d’arts, tapestries, wallpaper, ceramics, and glassware, plus toys from the Middle Ages to the present day. It includes numerous works in the Art Nouveau and Art Déco styles. From extravagant carpets to delicate crystal and porcelain, there’s almost too much to admire!

The Hôtel de la Marine is a historic building on place de la Concorde in Paris, to the east of rue Royale. It was built between 1757 and 1774 on what was then known as place Louis XV, with a façade by Ange-Jacques Gabriel, the king’s chief architect and designer of the square. Until 1798, it housed the Garde-Meuble de la Couronne, before becoming the headquarters of France’s navy ministry for over 200 years. Come and visit this unique monument in the heart of Paris and discover its refurbished 18th-century apartments, its stately reception rooms, and its restaurant in a building that the Centre des monuments nationaux has fully restored.

The Louis Vuitton Foundation is a French art museum and cultural center sponsored by the group LVMH and its subsidiaries. Star American architect Frank Gehry designed the building, which looks like a magical sailboat afloat on a man-made lake in the Bois de Boulogne. It is adjacent to the Jardin d’Acclimatation in the Bois de Boulogne of the 16th arrondissement of Paris, bordering on Neuilly-sur-Seine.

The Bourse de commerce (Commodities Exchange) is a building in Paris, originally used as a place to negotiate the trade of grain and other commodities, and used to provide services to businesses by the Paris Chamber of Commerce during the latter part of the 20th century. Since 2021, the building has been the Parisian exhibition site of the Pinault Collection. The dome of the building is listed as a historical monument. The museum includes pieces from Pinault’s private collection and more than 3,500 works valued at around €1.25 billion.

Et voilà! I hope this guide to the best museums in Paris will help you plan your next visit to the French capital. If you have any questions, please let me know in the comment below.

The 6 Best Paris Department Stores for Shopping and More

7 Best Things To See And Do At Christmas in Paris

15 Best French Movies That Will Transport You To Paris